inverting overdrive is the working title

The basis of "overdrive" as a sound effect derives from the situation that happens when an amplifier is driven beyond its limits in terms of the voltage swing it can present to the output, aka "clipping". A good amplifier will have perfectly linear response within a certain range, and "clip" the signal when the output reaches either of the positive or negative voltage limits, usually defined by the voltage of the power supply rails minus the drop across the output transistors. Distortion and overdrive circuits use diodes or some other circuitry to achieve a similar effect without driving the actual power amplifier to its limits. In either case, the output has a linear response with respect to the input for signals within a certain range, and outside of this range, the signal "sticks" to the positive or negative limit imposed by the circuitry. With extremely heavy overdrive, a sine wave is converted essentially into a square wave.

Instead of merely limiting the output voltage to a maximum (positive or negative) value, this (conceptual) circuit would invert the output when the limit is reached so that with an input reaching further beyond the "limit" imposed by the circuit, the output begins to travel back towards the other supply rail. Normally, when an amplifier or distortion circuit "clips," any information in the signal beyond the limit is effectively thrown away; the output is the same whether the input is 10 mV or 500 mV above the limit. If the signal is inverted at the limit instead of clipped, this part of the signal is retained, albeit in a distorted fashion. To some approximation, ie. for a triangle wave input of peak-to-peak amplitude exactly triple the limiting voltage, it can effectively double the frequency of the signal. 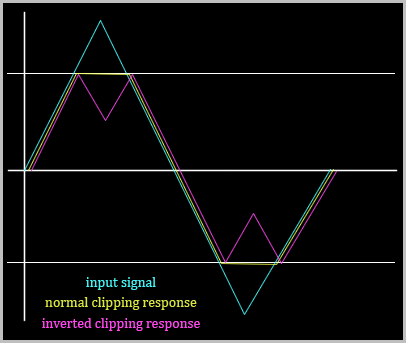