My roommates pulled a 60s or 70s electric organ out of somebody's garbage. It wasn't working, but I pulled the expression pedal off of it before we got rid of it. The pedal achieves volume control with a CdS photoresistor in a box with a small lightbulb on a slide attached to the pedal. I've built a compressor based around this, using the photoresistor in the feedback loop of an op amp, and driving the light bulb with a rectified version of the input signal. When the input level is high, the bulb dims, raising the resistance of the photoresistor, lowering the gain of the op amp circuit. There is a switch on the side of the pedal which can be hit with the toes that powers the bulb to full brightness, making it function simply as a volume control pedal.

It features hilariously bad wooden construction on a piece of 2x4 and potentially dangerous wiring. Powered with a typical lm7812/lm7912 split rail supply with absolutely unecessarily large 3300uF caps, except for the bulb driver circuit, which is powered from a 12v power pack I had laying around. The knob labeled "compression" controls the gain of the signal feeding into the rectifier circuit. "Bias" controls the voltage bias on the base of the bulb driver transistor (BD139). This was pretty haphazardly assembled and the resistor and potentiometer values allow for a wide range of settings which leave the bulb turned off, so no sound passes through it. With some fine tuning, aided by very simple LED level indicators, it will exhibit compression. With the knobs set differently it will act sort of like a noise gate. 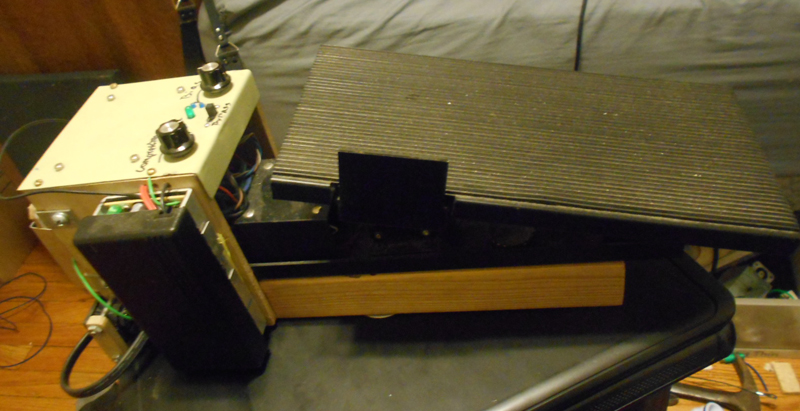 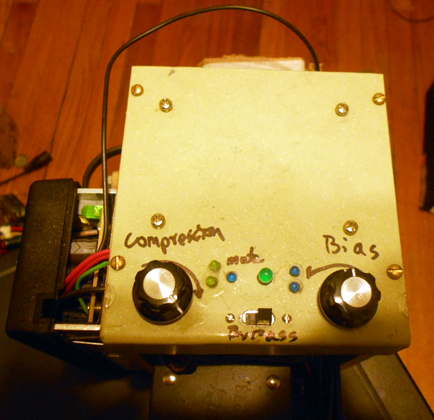